There is no shortage of beaches here. Almost every cove or anchorage on Isla Espíritu Santo and Isla Partida has at least some collection of sand. 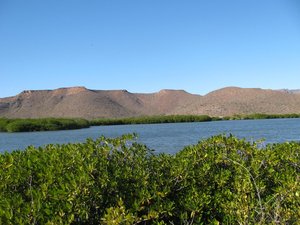 Of these, Bahía San Gabriel and Playa Bonanza, both on the southern end of Espíritu Santo, are the most impressive. The strands are long and curving with fine white sand. There is a trail, if you can find it, that cuts across the island to link these two beaches. We covered the territory in two bouts, travelling partway from San Gabriel and then, on a separate day, partway from Bonanza to an overlapping point. San Gabriel also has a very large lagoon, densely encircled by mangroves.

Bahía San Gabriel was our first stop out of La Paz (Dec 26-28). Our intention to stay for a third night was altered when the park rangers informed us that as of this year, San Gabriel was no longer open to anchoring. Disappointedly we shelved the plan to explore the area where the pangas were taking tourists for snorkelling. Although it was frustrating to not have been given this information when we purchased our park pass (three days earlier), it did allow us (and several other boats) to innocently get a visit in before being booted out. 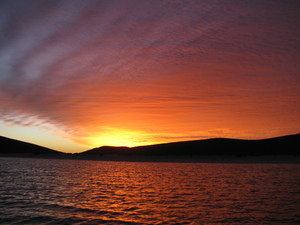 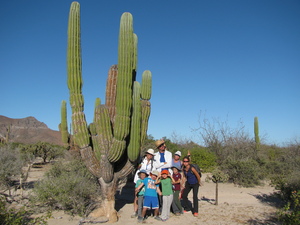 Sailing almost full circle around the Islas a week or so later brought us to the other excellent beach mentioned above, Playa Bonanza (Jan 4–8). In addition to its general good beachiness, Playa Bonanza provided a dandy rendezvous location. We had lots of fun hiking and snorkelling with the crews of Riki Tiki Tavi and Yare. Grown up boats are all well and good but kid boats have a quality all their own.

Snorkelling highlights here included a couple of green moray eels fully exposed – usually in the day they hide in nooks and crannies - and a incredible number of sea urchins, which resembled an infestation of prickly tribbles (Star Trek reference, if you are wondering). Barb also managed to glimpse a sea turtle scooting by.

After our expulsion from San Gabriel we sailed a bit further up the island to Caleta el Candelero. The bay is divided by the large Monument Rock, which looks quite impressive in the morning sun. At the head of the cove there is pitched a collection of tents. Pangas periodically zip through the cove (often close to anchored boats) transporting campers and kayakers to this attractive spot. All seemed well when we anchored but that night a strong west Coromuel wind blasted through making for a very bouncy anchorage and limited sleep. Fortunately, the next two nights were fine.

The islands of Espíritu Santo and Partida have amazing rock formations, types, colours and layers, and each anchorage has its own interesting variation. It's all quite beautiful but hard to describe when one didn't pay much attention in geography class. At Caleta el Candelero, a fairly short but scenic hike has one clambering over and amongst sculpted rocks to a dry waterfall, which appears to pour over a large wild fig tree. In times of high rains the water rushes through the arroyo down to the sea, but in the dry season all that remains of the waterfall are these black stains. Interesting to imagine such a torrent in this dry area and to notice how the plants growing in the arroyo were different from those more removed from this source of water, however infrequent.

Naturally we had to check out the underwater scenery as well. 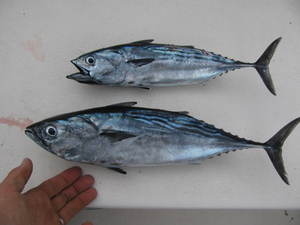 The day of New Year's Eve had us heading out from Caleta el Candelero shortly after sun-up, bound for Ensenada Grande on Isla Partida. A nice 2 hour upwind sail allowed Bjarne to catch two small black skip-jack tuna. Lime juice and garlic marinade before barbequeing made them a fine contribution to the beach potluck that night.

New Year's Eve produced a conundrum. How could we ring in the New Year when 9 pm (AKA Cruisers' Midnight) has most of us yawning and thinking about bed? Pathetic really. The La Paz Club Cruceros has had many years to figure this out so we borrowed their idea to use UTC (Universal Time, Greenwich Mean Time, or Zulu Time) - midnight UTC is a convenient 5 pm for us. It was an excellent way to welcome 2016: great food, a beautiful sunset, a starry night, interesting and fun folks, a bunny, and even a few sparklers.

The only drawbacks on New Year's Eve were sand in the food and the drunken singing emanating from a powerboat until after 4 in the morning. Bjarne had been grumbling that afternoon when the large yacht anchored close to us, not wanting to smell or listen to their generator; Barb suggested he was overreacting. After being serenaded by them for most of the night, points were conceded to Bjarne. Snorkelling in their compost and trash jettisoned overboard the next day didn't improve our impressions. Later we looked the boat up and discovered that it costs 5,800 USD/person/day to charter it, with an 8 person and 2 day minimum. Also of interest, the owner of the boat is apparently wanted in the USA for fraud. We concluded he was not likely to be receptive to reports of poor neighbourly behaviour of his captain.

Other highlights of Ensenada Grande include a pretty good assortment of underwater scenery, more facinating rock formations and plants, and a great hike to the other side of the island. The hike goes through interesting geography to a high cliff and an impressive lookout spot on the east side of Isla Partida. 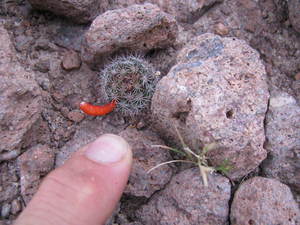 Along the way we found many examples of resilient plants growing in unlikely locations.

One day Bjarne provided this surprising snorkelling report: "there are french grunts, french angelfish and fine french porcelain." Sure enough he hauled up a china plate, made in france and handpainted with a logo that matched a big fluffy (once cleaned of seaweed) towel found the next day.

It was here that we parted ways with Anjuli and Konami. We had travelled with them since Turtle Bay, celebrating together not only significant milestones in our journeys, but also three holidays -American Thanksgiving, Christmas and New Year's Eve. 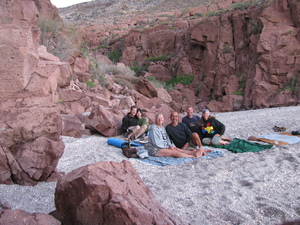 Our goodbye dinner was a small beach potluck. We lazed around after our excellent meal enjoying the emerging stars, chatting about times together and new adventures to come. Frequent farewells are part of the cruising life, although it is surprising how often paths cross again. Hasta luego, amigos!